NUB Status 1 is the highest priority designation available, and was only assigned to a small minority of product submissions for 2017. 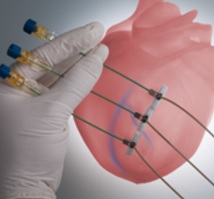 BioVentrix, Inc. a pioneer of technologies and procedures for less invasive treatment of heart failure (HF), announced that InEk, the German Institute for the Hospital Remuneration System, has awarded NUB Status 1 for the Revivent TC™ TransCatheter Ventricular Enhancement System.

The NUB process supports introduction of new and innovative medical devices in Germany. It allows participating hospitals to receive full reimbursement and a supplemental payment for new technologies in the German reimbursement system. NUB Status 1 is the highest priority designation available, and was only assigned to a small minority of product submissions for 2017.

“Achieving NUB Reimbursement Status 1 is an important step towards increasing product adoption in Germany, where there’s a growing need for effective, less invasive, and cost-effective HF treatment options such as Revivent TC,” stated Kenneth Miller, president and chief executive officer of BioVentrix, Inc. “We look forward to working closely with physicians and hospitals to bring this novel therapy to patients suffering from left ventricular dysfunction.”

BioVentrix, a privately held medical technology company headquartered in San Ramon, Calif., is focused on developing and commercializing minimally invasive therapies for treating HF. The company recently received CE mark certification for its closed-chest Revivent TC TransCatheter Ventricular Enhancement System for plication of scar tissue in post-MI, ischemic cardiomyopathy patients. Placement of the Revivent TC System via the LIVE procedure obviates the need for more invasive surgery. Instead, small titanium anchors are placed along the outer surface of the heart and along one of the interior walls via a catheter-based approach. The anchors are then pulled towards one another, effectively excluding the scarred and non-functioning heart wall. Ventricular volume is immediately reduced as a result of the exclusion, by as much as 30-40 percent.