The European Union new rules governing medical device and in vitro diagnostics (IVDs) are one step away from final approval. 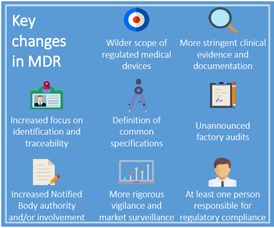 The 28 members of the Council of the EU unanimously voted to adopt the Medical Device Regulations (MDR) and In Vitro Diagnostics Regulations (IVDR), just two weeks after releasing the final texts of the regulations.
The new rules introduce deep changes in the regulatory framework for the marketing of devices and IVDs in Europe, the world’s second-largest device market.
Medical Device Regulation (MDR) final text
http://data.consilium.europa.eu/doc/document/ST-10728-2016-INIT/en/pdf

• EU Council has unanimously voted adoption of the MDR and IVDR on March 7, 2017.
• The European Parliament will then vote to enact the legislation in April, 2017.
• The texts will be published in the Official Journal of the European Union.
• MDR regulations will take full effect in 2020 (after a three-year transition period).
• IVDR regulations will be fully implemented in 2022 (after a 5-year transition period).
• It remains to be seen whether the UK will adopt the MDR and IVDR.

Preparing for the new rules
Device manufacturers should allocate time and resources to adapt to stricter, more complex requirements.

The new MDR measures include incorporating unique device identifiers (UDI) on all medical device labels. The UDI and other pertinent medical data will be accessed through a revamped European Database for Medical Devices (Eudamed).
In spite of the official timeframes for mandatory implementation, changes already have begun to affect Europe’s Notified Body sector. Manufacturers are likely to have fewer Notified Bodies to choose from and to partner with for CE Mark certification, quality system inspections, and related functions going forward.